Recently, I had the honour of being interviewed by Robinette D. Cross of Cross-Cultural Talks, LLC!

“Cross-Cultural Talks is committed to the instruction, education, and upliftment of all mankind and, as global citizens, making sure that all who wish to have access possess the fundamentals needed to be successful in academics and cross-cultural understanding.” 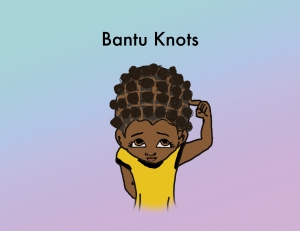 Bantu knots, also known as Zulu or Nubian knots, chiney bumps, pepper seeds, or hair nubbins, is a traditional African hairstyle, made by sectioning your hair into triangles, diamonds, or squares and coiling those sections into knots.

What you will need:

To keep your Bantu knots neat, wear a satin bonnet or tie your head with a satin/silk headscarf when you go to sleep.

Cornrows or canerows (or track braids) is a traditional African braiding technique. Cornrows are made by braiding the hair onto the scalp’s surface, after parting the hair into a design.

2. Clip the rest of the head of hair to the side or put it in a ponytail holder to keep it out of the way while you cornrow the parted section.

3.  Starting at the hairline, take a small piece of the parted section and split that piece into three equal strands.

Try to brace your pinky fingers against the head, and hold the strands as upright as possible, to help you get the right tension!

TIP: As you pull the right and left strands under the middle strand, run your fingers through to the ends to prevent the free ends from tangling.

TIP: Try to pick up the same amount of hair on each side to make the stitches/notches of your cornrow neat and even.

8.  Once all of the hair in the parted section is cornrowed against the scalp, continue to braid the free ends like a regular plait using the underhand method.

Keeping the cornrow from unwinding:

9.  Once you get to the end of the plait, if the hair is very curly, the cornrow may hold itself together. If not, you can either spiral the ends around your finger, using a little twisting gel/cream, or you can secure the cornrow with a snag-free/covered elastic band, clip, or barrette.

10. Unclip or loosen the unbraided hair and repeat Steps 1-9 until the entire head is cornrowed.

TIP: How you part the hair will determine the size and shape/design of your cornrows; so, to keep them even, in Step 1, part the new section the same size and in the same shape as the cornrow beside it.

Also, keep in mind, if you are cornrowing straight back, as you part the hair, you will have to taper the section toward the nape—the hairline and the crown of the head covers more area than the nape, so if you don’t taper the sections, you will run out of hair to cornrow at the back of the head.

Finally, to keep your cornrows neat, wear a satin/silk scarf or headtie, or use a satin/silk pillowcase when you go to sleep. Depending on how curly your hair is, how small the cornrows are, and whether you tie your hair at nighttime, your cornrowed style could last for a few days or up to a week or so. 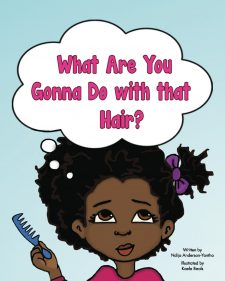 Everyone knows Zuri as “the girl with the puffy hair.” Her afro is big and fluffy, and not even gravity can keep it down. People often ask her, “What are you gonna do with that hair?” Zuri finds the answer in her cultural hair-itage and shows she can sculpt and shape her curls and coils into beautiful works of African art—braids, ‘locks, bantu knots—in other words, whatever she wants!

This illustrated non-fiction book encourages Black girls to celebrate the beauty and versatility of their natural hair and learn the rich history of natural hairstyles.

Get your copy today!

Available in Canada on Amazon.ca: Click here to purchase.

Available in the United States on Amazon.com: Click here to purchase.

Every day is a good hair day!

Let’s celebrate Black History Month together at the book launch for “What Are You Gonna Do with that Hair?” at Knowledge Bookstore (117 Queen St W, Brampton, Ontario L6Y 1M3) on Saturday, February 25, 2017, at 2pm!

This is a FREE event! Please register on Eventbrite: zurisbeautifulhair.eventbrite.com 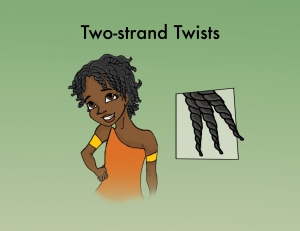 Two-strand twists are one of the basic styling techniques for natural hair. They are similar to braids, only you intertwine two strands of hair instead of three.

What you will need:

To keep your two-strand twists neat, wear a satin bonnet or use a satin/silk pillowcase when you go to sleep.

2016.  This year was really something.  This year, I did not do a good job of managing everything—this blog included.  For that, I sincerely apologize.  I was doing a lot.  At times, I felt overwhelmed. I felt like I couldn’t juggle it all. Then I would feel guilty and beat myself up. But I realize now that, sometimes, you just can’t do it all.  Or at least you just can’t do it all well.  And I have come to accept that that’s okay…

2007. Nine years ago, I was tasked with carrying a vision that was bigger than myself: I was commissioned to write a children’s book.  It was something that I had never done before, but for some reason, the people who sought me out thought I was capable.  I worked on that book while I was pursuing my law degree and had gotten to the copy-edit stage (with an expectation to publish in 2012)…

2011. Five years ago, during my articling year (after a long period of silence from the publisher), I found out (in a very roundabout way) that my book deal, along with all others at this publishing house, had been canned because the company had been bought out. So, after a couple of failed attempts to pitch the manuscript to other publishers, I shelved the project.

Maybe I wasn’t a writer, after all, I said to myself.

And, in any case, I had a blossoming legal career that I needed to attend to…

2014. Two years ago, I found myself newly married…and out of work.  As the Type-A person that I am, it wasn’t long before I was going half-crazy with nothing (thought-provoking) to do while spending time at home.  Until I felt God telling me to “go back to the project”.

God, don’t you know I need a JOB?! Who has time to publish a book?

After wrestling with the idea for months, and with the encouragement and support of my husband, I decided to acquiesce: I went back to my manuscript, updated it, and then fielded it for feedback from some authors and teachers…

2015. A year ago, I made the difficult decision to re-write the book, on the advice of a few of my friends who work in education—who did not hesitate to let me know that “the kids aren’t going to read it” (thank God for real friends who will tell you the truth!)—and I also made the equally difficult (at least for me) decision to self-publish.  I then began the process of seeking out the “right” people to help me bring the vision to life, which came with its own set of difficulties and headaches…

Though I’ve never birthed a child before, I feel like my experience has been what I imagine a pregnant woman must go through (based on the accounts of friends and relatives).

Sometimes your baby is born earlier than expected, sometimes overdue, but always at his or her appointed time.

During my journey, I learned so many lessons about people and about myself.  I’ve learned that others will not care about your vision in the same way that you do.  I’ve learned that while it is important to devote your everything to your vision, you also have to take care of yourself given that you are the vessel through which it will enter the world; the healthier you are, the safer the delivery will be.

And then there was the emotional rollercoaster.  There were times throughout this process when I was so excited about the potential of what I was carrying; there were other times when didn’t think I was going to make it and was ready to abort it; there were times when I wanted to jump for joy because things were going great; and other times when I wanted to bawl my eyes out in anger and frustration (and I did—several times). And by the time I got to the end of my “gestation period”, if you will, I was completely exhausted and just ready for the vision to finally be birthed.

So, here she is, my first-born child: 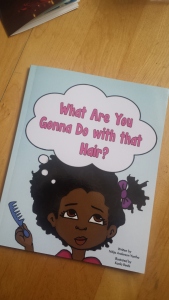 What Are You Gonna Do with that Hair? A book by Ndija Anderson-Yantha; Illustrated by Kaela Beals

I didn’t think I was going to make it, but I did.  Thank you, Jesus!

If you are carrying a vision of your own, trust and believe that it will come to pass!

If it seems slow in coming, wait. It’s on its way. It will come right on time (Habakkuk 2:3 MSG).

May you birth great things in 2017 and beyond! Happy New Year!

Meet Zuri
Zuri loves her natural hair and all of the amazing things she can do with it!

Follow her throughout history and around the world as she learns about the beauty and versatility of natural hairstyles in What Are You Gonna Do with that Hair?