As 2015 comes to a close, I’ve been taking the time to reflect on the things that went well, not so well, and overall, the many lessons that I’ve learned this year.  When it comes to my hair, specifically, though, I would say the biggest lesson I learned this year was “If it ain’t broke, don’t fix it”:

As you already know, I love being natural: I love the uniqueness of my hair; how big and fluffy it is; and its gravity-defying properties.  But what you may not know is that I’m a pretty lazy natural.  I mean, I wash and condition my hair regularly; get it trimmed when the ends get bad;  but compared to the extensive healthy hair regimens that I’ve heard that many other naturals undergo on a daily basis, I can’t say that I’ve ever been one to actually “take care” of my hair.

Prior to this year, my old haphazard regimen (if I could even call it that) consisted of using primarily Creme of Nature products, namely, washing and conditioning my hair with Creme of Nature Ultra Moisturizing Shampoo and their Professional Moisture Extreme Conditioner, respectively.

For styling, I would spray my hair with water and then moisturize it with Creme of Nature Argan Oil Moisturizer and shea butter before (a) setting it in two-strand twists for my twist-outs; OR (b) having my sister cornrow it for me (if I got lucky), OR (c) single-braid it with extension hair (if I really got lucky); OR (d) before I would slick on some Creme of Nature Argan Oil Gloss and Shine Polisher and give myself a blow-out.

However, after reading The Science of Black Hair by Audrey Davis-Sivasothy and then attending The Natural Hair Congress  earlier this year- and being enlightened on a number of things I’ve been doing wrong-  I decided that for the remainder of the year, I was going to make a concerted effort to take care of my hair, to optimize its health and to see whether I could maximize my length retention.

So I taking advantage of a sale at Target, while in the States, I bought myself some Cantu (sulfate-, paraben-, silicone- free) shampoo, conditioner, leave-in conditioner, and styling creme; as well as some Shea Moisture Coconut & Hibiscus Kids Extra-Moisturizing Detangler Spray; and started on my pathway to my new healthy hair regimen!

Shortly thereafter, my Mom and brother had started using coconut oil, and having heard about its miracle-working properties from numerous sources, I decided to start using it too.

I was so excited about finally treating my hair right…until it started to get hard…but I thought it was just my texture reacting to my not using products with sulfates, parabens, silicones, and all- other-things-that-are-bad-for-Black-hair, anymore.

But then it started to break…I mean, really break.  I would gently touch my hair with my finger tips, and pieces would just come off in my hands; and when I would detangle it with my Tangle Teezer or manipulate it in any way, flurries of little curly-cues would end up covering my floors (which I’m sure my husband was thrilled about).  My hair would be everywhere!

I started freaking out, and immediately stopped using the Cantu products and the Shea Moisture spray.  But it was still hard and still breaking.

I tried going back to my old chemical-filled shampoos and conditioners.  Still hard, still breaking.

Then one day, out of frustration, I Googled “natural hair dry brittle breaking”, and the first hit was an article talking about coconut oil and brittle natural hair. 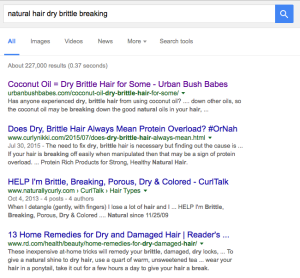 The whole time during this ordeal with my hard-and-breaking hair, I was still using coconut oil (along with my favourite product of all, shea butter).

Coconut oil?! How could it be? I thought.  Coconut oil was supposed to be the oil of all oils and every naturalista’s saviour, right?!  Well, for my hair, it definitely wasn’t!

So, I stopped using both.  But my hair has been a mess, ever since! And I still wasn’t sure what exactly it was that had messed it up.

Recently, a friend of mine shared this article on Facebook: http://blackdoctor.org/470909/7-reasons-to-stop-using-coconut-oil-and-shea-butter-on-your-hair/

It was then that I realized that it was not just the coconut oil, but rather my combination of coconut oil AND shea butter that had “sealed” my fate, leaving my hair hard, dry, brittle, and filled with fairy knots!

I was this close to cutting it all off, but before doing so, I decided to speak to Dr. Susan Walker of Earthtones Naturals two weeks ago to see if she could help me fix it.  She told me that I had been using coconut oil in the wrong way- that it cannot be used to “seal” your hair and that I should have been using it as a pre-poo treatment instead- so it was no wonder that my hair was super-dry.  (And here I was thinking that you could just use coconut oil for everything- WRONG!)

It also turned out that Susan had just put together a 7-Day Rehydration Challenge for her subscribers (check it out here: 7 Day Rehydration Protocol); and for the past week, that’s what I’ve been doing: trying to re-hydrate my hair.

So far, it’s been working- my hair feels much more supple than it has in months.

What, if any, are the lessons you learned about your hair in 2015? What will you do differently in 2016?